Some Kind of Magic 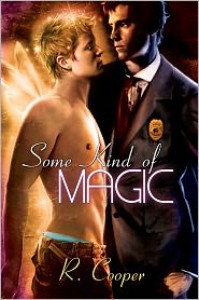 Let's start with the fact that I started reading the series out of order, and while I know that they aren't necessarily connected plot-wise, I can say if I had read this first I wouldn't have continued with the series.

The entire first half to three quarters of the book was just blah, which is partially why it took me so long to finish it. It was a short 100+ page novella; I should have finished it in hours, not days! There was an over abundance of UST and angst in the first half of the book. It was just pining and misery and the protagonist, Ray denying what he and his instincts wanted. And what made it so bad was that he was guilty of judging Cal by the stereo-types people placed on his people.

Ray Brannigan is a detective and a werewolf. He has to deal with the prejudices of people who believe the old movies where werewolves were vicious and howled at the moon and wanted to tear people apart and claim/mark their lovers. While he wanted to claim and mark Cal, it's because he was his mate. And unlike the stories, he had enough self control to resist him for years. Cal is half-fairy, and the myth about fairies is that they can't settle or love forever. They are always about being happy and making people happy, so the belief is that they would constantly move from lover to lover to maintain a constant state of happiness. Ray fell into the trap of believe the myths instead of just confronting Cal with the fact that he was his mate and what it would mean to each of them.

What didn't make sense was that Ray hated that people believed the myths about weres and was bothered that they didn't find the time to talk to someone or just read a book and learn the truth, but he was no better than the people that aggravated him! As a werewolf, how would you have that double standard?! The myths about weres weren't true, so why assume the myths about fairies were?! There was so much angst in the first part of this book that it was more like wangst!

And then it got good. They got a better idea of why the serial murders were happening; Ray FINALLY gave in and took Cal to bed! Then the murderer was finally revealed--I figured it out the chapter before it was revealed. Cal was in danger and Ray threw himself into the middle of it to save his mate. He finally admitted out loud that Cal is his mate.

Then Ray wakes up in the hospital and the blah returns. Now I'm all for angst and fluff in their proper proportions, but this book was very unbalanced. After getting a lecture from Cal's father (and Ray's mentor), he's left to finally talk things out with Cal. This leads to a ridiculously long flashback that did nothing to explain that Cal had been in love with Ray for as long as Ray had been in love with him. But that is what the lengthy flashback was meant to show. The only thing I got from it (besides boredom) was that Ray was scared and hiding his feelings because of it, and that Cal was obviously attracted to Ray. Nowhere in the flashback did I get a feeling of love. Now if the author had said that the half-fairy could sense that he was Ray's mate, it would have worked better. But all I got was lust and genuine attraction. And this long, drawn-out flashback from an incident three years ago, was at the end of the book, further making it confusing. It was just badly placed. After the flashback Ray magically understood that Cal loved him too and that fairies weren't as flakey as the myths claimed them to be. They happily ever after.

After reading Little Wolf and learning about the existence of Ray, I was excited to read his story. It was sadly underwhelming. Maybe it's because this was the first story in the series and they (hopefully) get better as the series progresses. Or maybe the author just didn't have the muse for this one as she had for Little Wolf (because I gave that like 4-5 stars!) This one was just meh. As I know at least one other story in this series is fantastic, I will continue with it. If you want my honest opinion, please just skip this one and move on to the other books in the series.