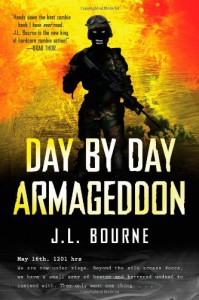 This book was fantastic. It is told through the main protagonist's journal entries; we never find out his name. He's a naval officer who was just returning home to Texas from visiting his parents in Arkansas when the zombie apocalypse hits. The story follows him as he watches news coverage of what begins as a violent strain of influenza in China, to the quarantine of the US being breached, and the government breaking down. He starts off alone hold up in his fortified home afraid that he will lose his sanity long before the dead get to him, but eventually meets another survivor on his block.

The duo make a daring escape from their overrun area and travel from place to place, staying only as long as is safe, and having a few near death experiences along the way. John and Annabell, a miniature greyhound, become the protagonist's whole world and they all work together to survive, hoping to find some working form of government, or some place in civilization that hasn't fallen.

Without spoiling it for you, they meet some people along the way as they move from :safe-house" to "safe house".

The story grips you and reads almost like a movie. I was anxious for their safety and waiting for the jump-scare with every sentence I read. I've been come attached to the characters in this book and now I am committed to reading the entire series to see how their survival progresses.