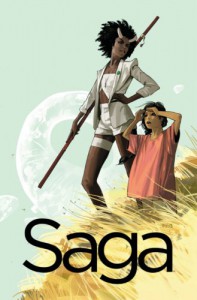 So this is only the third comic series I've gotten into...no, fourth, but that's just my way of saying I've only gotten into comics over the last few years.  Comic Con probably had something to do with that.  Went for the celebrity panels, kept going back for the comics, lol!

Anyway, I. Love. This. Series.

It's really hard for me to review. The story is fun, the art is beautiful, the characters, even the antagonists, are so likeable.  Just A+ for the whole thing.  I just have one thing to say. If anything really bad happens to Lying Cat... I will be one pissed bee! And see, I kept it classy by using harsh letters instead of cursing.