Review: They Both Die At The End 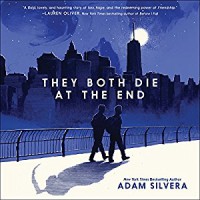 I don't know why I chose to listen to this audiobook this week as I just lost an old friend who was like a kid sister to me.  I watched her grow up, and while our lives moved us in opposite directions these last years, we still had a lot of history.  She was a bridesmaid in my wedding.  But I digress, as usual.  Man I am really bad at reviews sometimes!  But this is me, and I write it as it comes.

Before I get into the story, I want to say that I loved the diversity/representation portrayed in this book.  There are people from different races, ethnicities, walks-of-life, social status, and sexual orientation.  It all flowed very beautifully and it wasn't forced and there was no tokenism.  It's refreshing to see and it was well written, which makes it even better.

So the whole premise of this story is that a company has created a way to predict death.  Now, each day between the hours of midnight and three a.m., certain people receive a call letting them know that at some time within the next 24-hours, they will die.  That's pretty messed up, right?!  I kind of get the idea, if you knew you were going to die, you could say 'proper' good-byes and maybe do things you never had the courage to do.  But at the same time, would you really want to know?  Personally, while I would get a chance to spend time with my loved ones, I would also have to live the entire day with the knowledge that I was going go die in some mysterious, unnatural way.

The story follows (specifically) Mateo and Rufus who are 17/18-year-olds and they have both received the telephone call letting them know that they are going to die.  They aren't told how or exactly when; they just know they are going to die.  Both are, obviously, in a state of shock and disbelief.  Rufus had just lost his entire family four months prior and was living with a serious case of survivor's guilt.  Mateo is a frail, and paranoid kid whose mother died giving birth to him, and his father is currently in a coma.  He's sad and angry that if--when his father wakes up, Mateo will be gone without having had a chance to say good-bye.

Their stories intersect when they each decide to use an app called "Last Friends".  It was created for people who get the death call and want/need someone to spend their final day with.  Together Mateo and Rufus spend their last day in various places around the city, getting to know one another, and helping each other come to terms with their impending doom.  There are all sorts of services throughout the city aimed toward "deckers", some are genuinely meant to help them live out a dream or have a few great final memories; while others are just meant to milk money from dying people. In less that 24-hours they become the best 'last friends' either could have hoped for.  They connect on a level that most others could never understand.  Mateo helps bring Rufus back to life; he was lost after the death of his family.  Rufus shows the sheltered Mateo how to live the life he's always wished he could.  They are so thankful that they got to meet; although wishing they could have done so sooner.  But they wonder if meeting is what causes them to die.

So that's the other question, isn't it?  Does knowing you're going to die inevitably cause your death?  I don't want to spoil the story, but you will be asking yourselves the same questions when you read it.  They story was so real (the audio cast truly brought the characters to life).  It was believable and implausible at the same time.  It was bittersweet and beautiful and sad.  It didn't get me until right before the very end, although a different me probably would have been sniffling through a good bit of it.  And while it did make me cry (it goes on the short list of books that have), I don't think it was a sad story.  It was a lovely story about living each day as though it were a lifetime and not taking your tomorrows for granted.

Read this book.  You won't regret it!